Beyond the Barn > July 2019 > Japanese Beetles are Coming 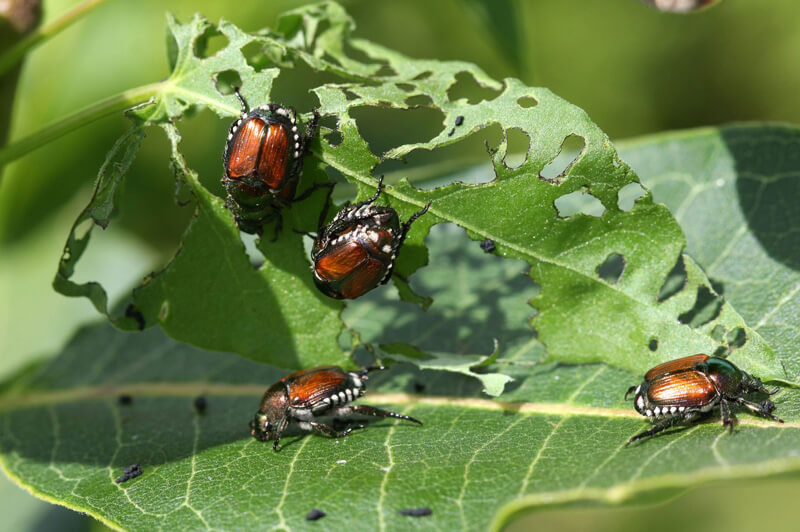 No one likes to see Japanese beetles on their property; but it seems inevitable. They are an invasive species that feed on the leaves, flowers, and fruit of more than 300 species of plants. Japanese beetle grubs will chew on grass roots and cause the turf to brown and die. Damaged turf will easily pull from the soil like loose carpet. The Japanese beetle infestation in Minnesota can be mostly found in the Twin Cities area and southeast region of the state. The good news is there are options for managing both adult and grub Japanese beetles.

Japanese beetle grubs will spend their winter underground in the soil of lawns, pastures, and other grassy areas. They move up near the soil surface in the spring to feed and pupate into adult beetles. The adults will emerge from the ground in late June or early July and will fly up to several miles to feed. They are most active with their feeding in July and August.

Females tunnel underground up to three inches of soil to lay eggs after mating, which occurs several times during July and August. One female can lay as many as 60 eggs and they take two weeks to hatch. As the temperatures start to cool in the fall, the nearly mature, full-sized grubs will dig deeper into the soil where they spend their winter.

Adults feed off of many different plants. Some of the favored ones include rose, grape, linden, apple, crabapple, cherry, plum, birch, elm, raspberry, currant, basil, hollyhock, marigold, corn silks, and soy bean. They feed on the tissue between the major veins of the leaves and give them a lace-like appearance. Adult Japanese beetle damage typically only affects the appearance of plants with a few exceptions. Young or unhealthy plants may be stunted or killed from severe feeding. Fruits, vegetables, and herbs can handle limited feeding, but severe damage may alter the plant’s growth and reduce its yield. Healthy, mature trees, shrubs, and flowering plants can survive Japanese beetle feeding.

Grubs chew grass roots which will reduce the ability of grass to absorb enough water and nutrients. Dead patches of grasses may appear when grub feeding is severe. In these cases, the dead patches can be pulled back like carpet. Other critters such as moles, skunks and crows may dig up grubs for food which will further damage the grass.

Start managing early and keep an eye out for them starting to emerge in late June and early July. Early management will help them from escalating. It is important to manage for the full six to eight weeks while they are feeding until their numbers decrease. Once they are present in large numbers, managing them is more difficult. Killing the individual beetle or two is easy. They can be handpicked and dropped into a bucket of soapy water to drown. However, when they are numerous this becomes impractical.

There is no one guaranteed method of treatment. The Waconia Garden Center carries a ready to use spray “Japanese Beetle Killer” made by Bonide which contains pyrethrins and piperonyl buloxide. To help protect bees, apply products during late evening after bees are no longer active. The plants should be dry by morning when bees become active again. Be proactive and take advantage of our $3.00 off sale.

Once a grub turns into an adult it can fly considerably far to feed, so controlling grubs in hopes to reduce numbers of adults is unlikely. You want to treat grubs to protect your lawns from damage. If your lawn has a history of grub damage, you may want to treat with a preventative insecticide in June or early July. We recommend BioAdvanced Grub Control. If you notice grub damage and have not treated the area, you can use curative insecticides such as Spectracide Triazicide Insect Killer.

To minimize any hazard to pollinators, mow any flowering weeks such as clover and dandelions just before the pesticide is applied. Also avoid using insecticides in areas being used by ground-nesting bees.